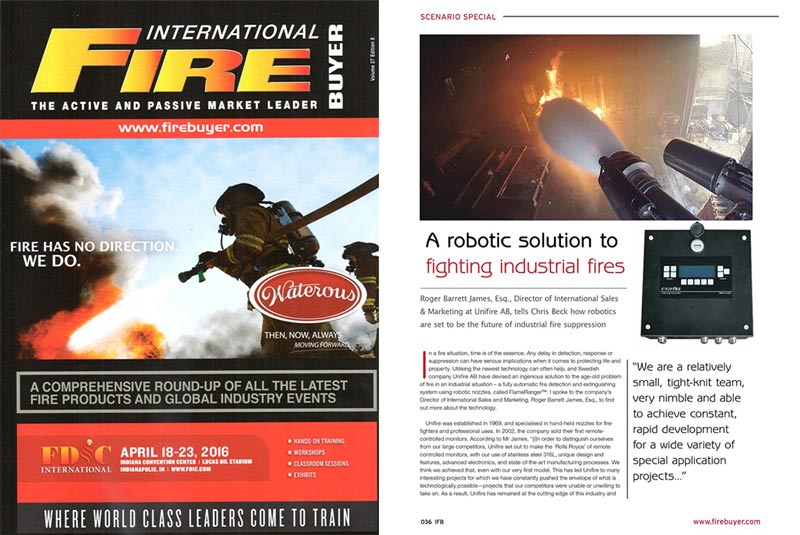 The article is republished here with permission from the magazine. The full text is also set out below.

The text of the article appears below:

In a fire situation, time is of the essence. Any delay in detection, response or suppression can have serious implications when it comes to protecting life and property. Utilising the newest techno logy can often help, and Swedish company Unifire AB have devised an ingenious solution to the age-old problem of fire in an industrial situation—a fully automatic fire detection and extinguishing system using robotic nozzles, called FlameRanger™. I spoke to the company’s Director of International Sales and Marketing, Roger Barrett James, Esq., to find out more about the technology.

Unifire was established in 1969, and specialised in hand-held nozzles for firefighters and professional uses. In 2002, the company sold their first remote controlled monitors. According to Mr James, ” [i]n order to distinguish ourselves from our large competitors, Unifire set out to make the ‘Rolls Royce’ of remote controlled monitors, with our use of stainless steel 316L, unique design and features, advanced electronics, and state-of-the-art manufacturing processes. We think we achieved that, even with our very first model. This has led Unifire to many interesting projects for which we have constantly pushed the envelope of what is technologically possible—projects that our competitors were unable or unwilling to take on. As a result, Unifire has remained at the cutting edge of this industry and we offer what are undoubtedly the world’s most flexible, sophisticated and capable robotic nozzle systems. This has been possible because we are a relatively small, tight-knit team, very nimble and able to achieve constant, rapid development for a wide variety of special application projects.”

Within seconds of a fire breaking out, the flame detectors send a signal to the TARGA computer indicating the presence of a fire and its size and location data on an x/y coordinate system. The TARGA requires that both detectors, which are placed at juxtaposed angles, independently detect the fire before the system reacts, reducing the risk of false alarm to nearly zero. The TARGA then combines the data from both detectors to triangulate the three-dimensional size and location of the fire. It then accurately aims the Force robotic nozzle at the fire, opens the valve, and dynamically suppresses the fire with a large volume of water or foam, until the fire is extinguished. When fire is no longer detected, the TARGA closes the valve, yet remains actively detecting for fire, ready to intervene should fire break out again.

The technology is both completely automated and almost incredibly effective. I asked Mr James how long it would take for the FlameRanger system to extinguish a fire. He explained that “the system detects and begins suppressing a fire extremely rapidly. Unlike traditional fire-fighting sprinkler systems—which, by comparison, react slowly and provide only a wide area of small water drop lets, often insufficient to extinguish the fire at its source—the FlameRanger system reacts almost immediately, accurately suppressing with a high volume of agent directly onto the fire, which is crucial to the success of fighting a fire. This dramatically increases the effectiveness and also cuts down on water damage to the surrounding environment because it only targets the fire at its source.”

Moreover, Mr James added that , “in full scale fire testing recently performed by the U.S. Naval Research Laboratory, the system running in fully automatic mode was able to detect a fire and suppress it in as little as five seconds. The Navy’s test report states that:

‘The system detected the fire so quickly, that the fire-fighting party igniting the heptane pan fires below the stacks of pallets, had to run out of the hangar after ignition. The system applied water to the fuel package within five seconds of ignition. The applied water prevented the pallets from igniting … ‘

At all times, the system uses real-time data to direct the nozzles. This means that if the fire moves, changes size or position, or more fires break out, the robotic nozzle reacts accordingly, capable of suppressing up to four separate fires detected simultaneously.

Another innovative feature of the system is the UniWeb Human User Interface. UniWeb provides the ability for one or more human operators to monitor and remotely take control of any robotic nozzle in the network, open and close valves, view the CCTV camera images, etc. All of this information and control can be accessed from any standard computer, laptop, tablet or smartphone with a secure network connection, including over the Internet. Each system can be customised to the customer’s needs, including functionality, logic sequences, language settings, etc.

Both the FlameRanger and UniWeb are easily networked to create infinitely large systems. Each robotic nozzle ‘cell’ in the system is able not only to work independently, but can also take in and react to data from the other ‘cells’. This means, for example, that “a cell that detects a fire would suppress it, while the neighbouring robotic nozzle could react by either assisting, or cooling surrounding equipment or structures,” Mr James explained.

I asked Mr James to describe the robotic nozzles themselves and what distinguishes them from typical fire-fighting monitors. He explained that, “since early 2015, Unifire has come out with an all-new generation, first of their kind, type of remote control monitors , which we now classify as ‘robotic nozzles’. They qualify as industrial robots according to the definition set out in ISO 8373. Among other things, they use brushless (BLDC) motors—the type used in typical industrial robots. Compared with traditional DC motors used by our competitors, BLOC motors provide much longer life (up to 10,000 hours), greater accuracy (a fraction of a degree), higher torque and greater efficiency. Moreover, our new TARGA PLC and UniWeb systems allow for extremely flexible automated features, networking functions, programming, etc., similar to what you would find with typical industrial robots. The combination of these features allows us to offer anything from simple, typical solutions—such as for municipal firefighting vehicles and police riot trucks-to fully networked, advanced systems with complex logic sequences, control of peripheral devices, reaction to data inputs, etc.”

I then asked Mr James about the potential applications for the FlameRanger system. These are, unsurprisingly, numerous. According to James, “FlameRanger has been designed to protect facilities such as tunnels, oil and gas facilities, aircraft hangars, Large Volume Spaces (LVS) on ships, naval vessels and aircraft carriers, the exteriors of large buildings, atriums, sports arenas, arrival halls at train stations and airports, storage facilities, warehouses, etc. Essentially, any large space where conventional suppression methods cannot effectively or quickly detect and suppress a fire. All components of the FlameRanger have been designed to withstand harsh environments, the primary components of which are made of stainless steel 316L.”

To finish, I asked Mr James about the future of robotics in fire-fighting, and whether industrial situations would become more automated in the coming years. “While it is difficult to estimate how automatized everything will become. The advantages of automatic systems are obvious,” he said. “As we all know, computer techno logy and information technologies in general, are advancing at an exponential rate, and costs are declining exponentially as well. This revolution will dramatically affect every industry, including firefighting-just as we are poised now to do with our robotic nozzle technologies. I do not believe that cost will be the issue, as even our current systems are only marginally more expensive than standard remote controlled monitors . Rather, the primary hinderance to large-scale implementation to automatic systems is mentality. The firefighting industry is very traditional and many in the industry are reluctant to trust the job to robots. I predict, however, that a paradigm shift will take place in the very near future, as these systems begin to be implemented and prove to the industry that they can be much more effective than traditional, human-operated systems.”

More information about the system, including a video, is available at Unifire’s web site devoted to the FlameRanger system at AutomaticFirefighting.com.